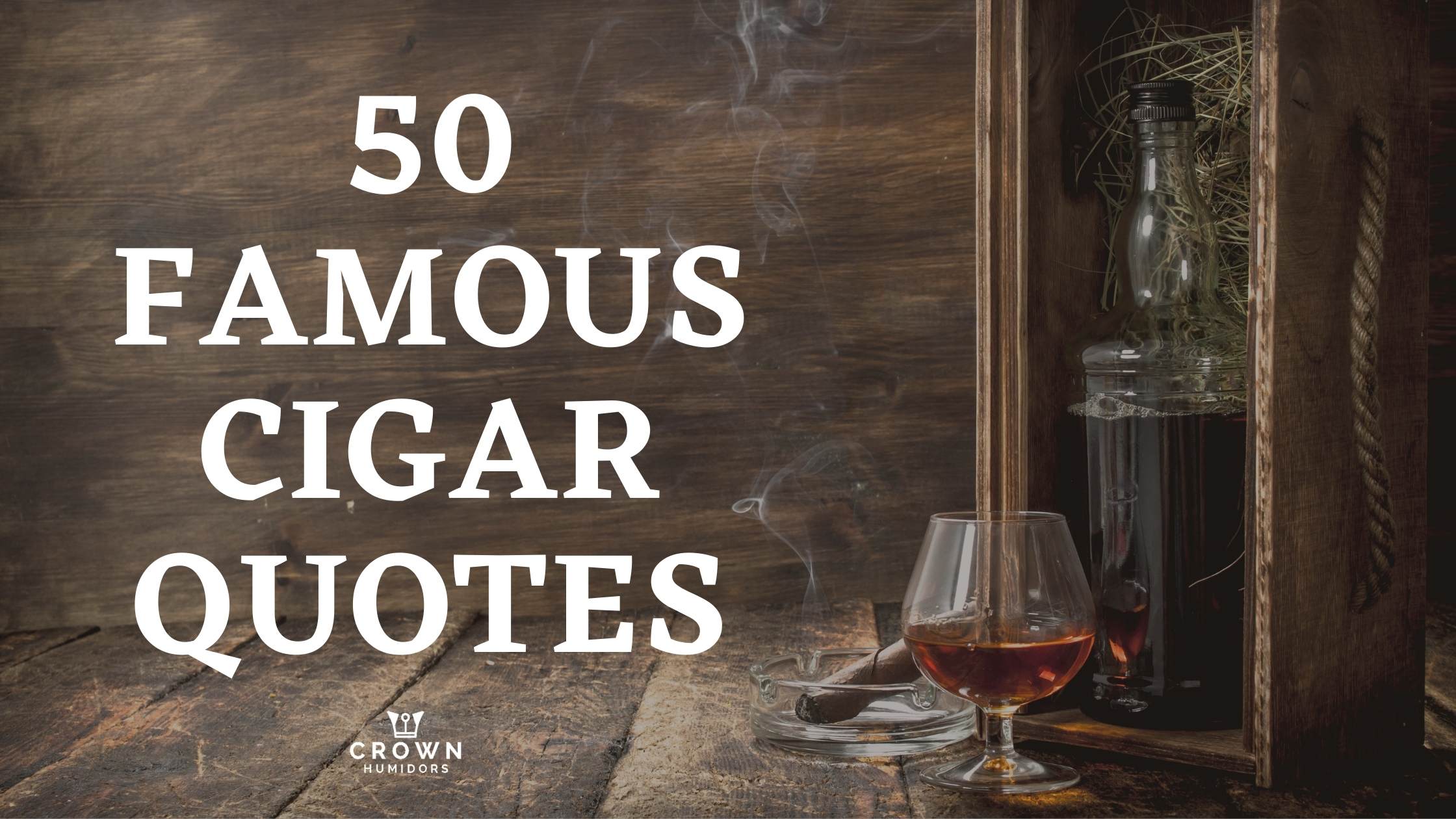 If you’ve been a cigar smoker for very long, chances are that, at some time or another, you’ve heard one of these famous cigar quotes. If you spend enough time on the golf course smoking cigars with your friends, you’ll hear some new ones before long. check out the list of the best famous cigar quotes only here at crown humidors!

“It has always been my rule never to smoke when asleep, and never to refrain when awake.”
—Mark Twain

“It has been my experience that folks who have no vices have very few virtues.”
—Abraham Lincoln

“Smoking cigars is like falling in love. First, you are attracted by its shape; you stay for its flavor, and you must always remember never, never to let the flame go out!”
—Winston Churchill

“Cigars served me for precisely fifty years as protection and a weapon in the combat of life… I owe to the cigar a great intensification of my capacity to work and a facilitation of my self-control.”
—Sigmund Freud

“There’s something about smoking a cigar that feels like a celebration. It’s like a fine wine. There’s a quality, a workmanship, a passion that goes into the smoking of a fine cigar.”
—Demi Moore

“Why pay $100 on a therapy session when you can spend $25 on a cigar? Whatever it is will come back; so what, smoke another one.”
—Raul Julia

“If I had taken my doctor’s advice and quit smoking when he advised me to, I wouldn’t have lived to go to his funeral.”
—George Burns

“Fresh air makes me throw up. I can’t handle it. I’d rather be around three cigars blowing in my face all night.”
—Frank Sinatra

A good smoker, like a good lover, always takes his time with a cigar.
– Guillermo Cabrera Infante

Maybe it’s like becoming one with the cigar. You lose yourself in it; everything fades away: your worries, your problems, your thoughts. They fade into the smoke, and the cigar and you are at peace.
-Raul Julia

Any cigar smoker is a friend, because I know how he feels.
-Alfred de Musset

My boy! Smoking is one of the greatest and cheapest enjoyments in life, and if you decide in advance not to smoke, i can only feel sorry for you.
-Sigmund Freud

A cigar,” said the altruist, “a cigar, my good man, I cannot give you. But any time you need a light, just come around; mine is always lit.
– Author: Karl Kraus

Ah, if only I had brought a cigar with me! This would have established my identity.
– Author: Charles Dickens

The cigar is the perfect complement to an elegant lifestyle.
– Author: George Sand

Sometimes a cigar is just a smoke and a story’s just a story
-Author: Stephen King

When you’re winning the grass is greener, the cigars are sweeter and the girls are better looking!
– Author: Mark Grace

A broken heart is what makes life so wonderful five years later, when you see the guy in an elevator and he is fat and smoking a cigar and saying long-time-no-see.
– Author: Phyllis Battelle

Love is an exploding cigar we willingly smoke.
-Lynda Barry

On a cold winter morning a cigar fortifies the soul.
-Stendhal

A cigar numbs sorrow and fills the solitary hours with a million gracious images.
-George Sand

Love: It is like a cigar. If it goes out, you can light it again but it never tastes quite the same.
-Archibald Wavell, 1st Earl Wavell

When I have found intense pain relieved, a weary brain soothed, and calm refreshing sleep obtained by a cigar, I have felt grateful to God, and have blessed His name.
-Charles Spurgeon

I drink a great deal. I sleep a little, and I smoke cigar after cigar. That is why I am in two-hundred-percent form.
-Winston Churchill

A woman is an occasional pleasure but a cigar is always a smoke.
-Groucho Marx

A cigar has “…a fire at one end and a fool at the other.”
-Horace Greeley

I’ve got a great cigar collection – it’s actually not a collection, because that would imply I wasn’t going to smoke every last one of ’em.
-Ron White

Throughout my life, cigars have played different roles for me. They fit easily and well in the various stages and experiences I’ve had — like a companion, almost. If you’ve smoked a long time, as I have, they become part of you.”
-LeRoy Neiman

“There’s a ritual about smoking a cigar that slows my clock down.”
-Matthew McConaughey

“It is the most relaxing thing. Every time I get to a point where everything is coming at me, I would rather just sit back and smoke a cigar and relax.”

“Personally, I believe a rocking hammock, a good cigar, and a tall gin-and-tonic is the way to save the planet.”
-P. J. O’Rourke

“Puffing on a good cigar just slows everything down and allows me to relax.”
-Phil Jackson

“Cigars are great tools for socializing and celebrating the good times. They also help you to reflect and relax during difficult ones.”
-Rick Pitino

“I’ll smoke anything anybody gives me.”
-Peter Falk

“Cigars force me to slow down and live in the present.”
-Muata Onyemachi

Cigars solicit conversation. You see someone smoking a cigar and you feel instantly closer to them.”
-Michael Stahan

“Tobacco is the passion of honest men and he who lives without tobacco is not worthy of living.”
-Moliere

“If I had taken my doctor’s advice and quit smoking when he advised me to, I wouldn’t have lived to go to his funeral.”
-George Burns

“As soon as I lit that cigar up, the pressure that I was feeling disappeared.”
-Karl Malone

“I love to smoke. I wish I had more than two hands so I can hold more cigars.”
-Johnny Depp

“Let’s fire up a cigar and go for a walk.”
-John Grisham

“I smoke cigars because at my age if I don’t have something to hang on to I might fall down.”
-George Burns

Cannabis humidors are a must - for every cannabis

everything comes in handy! visit our store today

Reliance humidors are crafted by hand of the fines

This beautiful humidor from Humidor Supreme will m

It's better when it's handy! Grab your csonka trav

#Repost @windy_city_cigars ... The way of the Samu

This lighter is truly an amazing invention due to

You'll love how this smart 4-finger design does aw

The CannbisDor is a revolutionary herbal humidor,